← more from
dStream
Get fresh music recommendations delivered to your inbox every Friday.
We've updated our Terms of Use. You can review the changes here. 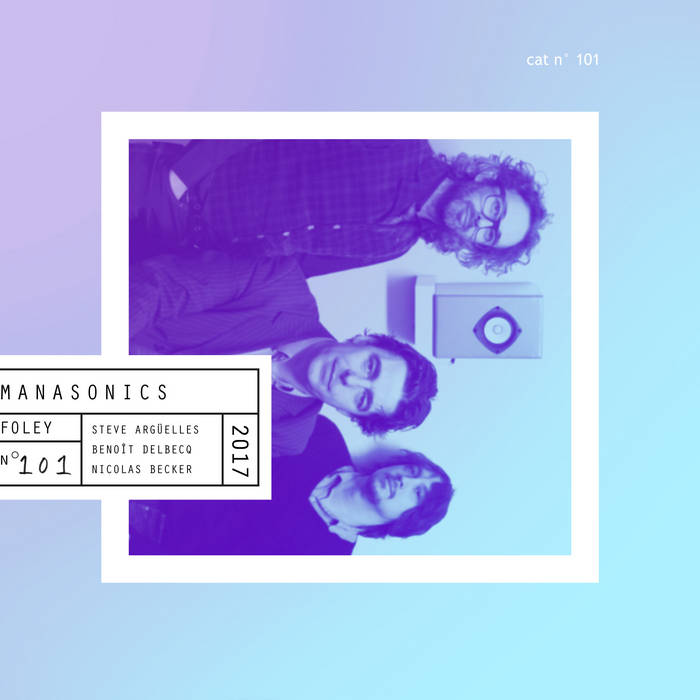 Randy Wentzel Favorite track? No way. This album works as a whole. An album for musicians and audiophiles alike. I've had one listen through and I'm at awe at how good this album is. 10/10 - perfect. Favorite track: on the lot.

The trio Manasonics is made up of Ambitronix (the established duo of pianist Benoît Delbecq and percussionist Steve Argüelles) with the addition of Nicolas Becker, a sound designer/foley artist well known in the cinema world with over 200 films to his credit, from Cronenberg and Polanski to La Haine, Andrea Arnold's Wuthering Heights, and sound installations and films for the artist Philippe Parreno.

The piano is essentially a system of hammers, and Cecil Taylor once described the piano keyboard as eighty-eight tuned drums. Benoît Delbecq's deployment of electronics alongside the piano can also turn the pianist's drum taps into eighty-eight percussive triggers for unleashing a whole new array of sounds. Together with Argüelles' drums and other percussion instruments, and Becker striking and otherwise manipulating the array of objects that make up the foley's armoury, Manasonics is therefore essentially a trio of percussionists.

My first hearing of Manasonics’ Foley had me re-listening to Miles Davis's extraordinary soundtrack for Louis Malle's 1958 film, L'ascenseur pour l’echafaud. Miles and his French quartet improvised a fragmented and episodic sequence of music that is filmic in itself, bringing both human action and atmospheric ambience to life even more when it is heard as pure music than it does in conjunction with the film it was constructed to accompany. The music of Delbecq, Argüelles and Becker similarly evokes a world of imagery but without requiring images as its raison d'être. Whilst some of Manasonics' music is from movie soundtracks they have made, or re-edits of them, much of it consists of improvisations that are edited, in the style of film post-production, from concert or studio performances. The variety of cinematic sources particular to the music is reinforced by the track titles, which are derived from cinema terminology.

It is common to speak of musicians 'making' music. Rarely is that verb so apt as here. A sound world is 'constructed' from diverse aural components that the musicians build into structures, sometimes complex, sometimes simple, only to deconstruct them again and rebuild them in a different form, in a stimulating and deeply satisfying sequence of events. It is that sequence of events that gives the music its filmic quality.

This cinematic dimension and the constructed nature of the music are reinforced by the presence of the foley artist (bruiteur) Nicolas Becker. The normal task of a foley in film, TV or radio production is to create sound effects, simulating real world sounds by the deployment of an array of real world objects and materials, usually quite unrelated to the things whose sounds they imitate. Here that abstract distance between object and sound is extended exponentially by being denied a descriptive or imitative function, it's purpose instead being purely musical, adding to the stock of material available to the musicians from which to build their sound world.

Rather like, in a different art form, Robert Rauschenberg's 'Combine' paintings in the 1950’s, the presence of the foley in this trio weaves the real world of objects into the fabric of the composition, simultaneously transforming them into evocations of things they are not. This is music that mixes the purity of instrumental sound, the electronic distortions and multi- layered complexity of digitally generated sound, and the analogue manipulation of 'real world' sounds, to conjure a simultaneously abstract and referential musical ambience. Foley is a collection of extraordinary music that results from the creative combination of very different traditions of sound making through a unique collaboration.

Bandcamp Daily  your guide to the world of Bandcamp